Rockstar Games is famous for its series of introductions to the underground world. For them, a product that talks about the violent world is too familiar. In addition to the GTA series, they also have other products, such as Bully: Anniversary Edition. This game continues to talk about violence in modern life and will give players one of the most novel gameplay. The game version that we are going to experience is one of the products to celebrate the Bully’s success. This game has been released since 2006 and continues to grow until today. It has also been published in various platforms from PlayStation 2, Wii, Xbox 360, and two versions for smartphones running Android and iOS operating systems in 2016. In general, this game is also considered one of the best products — the most successful product of RockStar publisher. 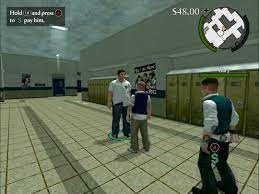 If anyone has tried to play this game before, it will undoubtedly know the familiar name of James “Jimmy” Hopkins. Our protagonist comes to Bullworth, where there is no protection for weak students. James realizes that this school is full of horrible bullies that hinder the learning journey of many people. So he was determined to stand up to fight the bully and bring a peaceful atmosphere to all students attending this school. Certainly, this will face the opposition of many who are accustomed to domination in that environment. Don’t be afraid to think of a bright future to keep trying and fighting for what you believe. Graphics of the game are not called excellent if compared to the current blockbuster. However, like its brothers, RockStar products are designed with a feature that anyone can recognize. With full 3D graphics and everything outlined sharply, Bully is not the same as current games. The lines still have the design nature of the famous 3D cartoon images of America. That’s why it gives a familiar look and more natural feeling to players. Although it is not too close to reality, everything is designed with a real model, without too much deviation. This is an action game where players will be playing the mischievous 15-year-old Jimmy Hopkins who lives in the most dangerous school in the area. There you will have to stand up to bullies, get picked up by teachers, beat ball jocks at dodge, play pranks, win or lose the girl and survive a year in the worst school around. Perhaps the gameplay of this version is quite similar to Bully: Scholarship Edition, but there are a few things that have been redesigned. Most impressive is that we will enjoy an entirely new mode of multiplayer with new Friend Challenges. In this new mode, the player will face all the bully in the head-to-head classroom and arcade style mini-games. For example, small and simple games that show your skills as Who is the fastest frog surgeon in biology? Who is the best in solving English exercises? Who can help a flying squirrel destroy his enemies with acorns in Nut Shots?, And much more.