We live in a world where science is so technologically advanced. This is an era where people are increasingly approaching artificial intelligence and cyber-robots. Japan is one of the most successful countries in robotics when it comes to working with people. In the production stages or the types of robots that can talk to people, do housework. In the future, through the perspectives that both western and eastern humans draw in animated films, we can imagine robots capable of fighting, exploring, and doing very well. Many human substitutes. And also to draw a vision of an extremely developed world with extremely powerful fighting robots, Kisunja – Free Shooting Games has created an extremely exciting game called CyberSphere Online. 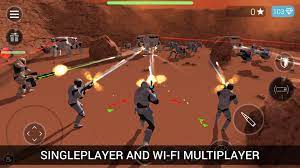 When you enter the world of CyberSphere Online, you will see this is a world where humans are attacked by aliens and extremely terrible cyborgs. And your mission is to build an army of cyber-robots and fighters to fight off the invaders. You will be given a choice of armour, armour and weapon types. There are many types of robots and cyber dresses, with green, blue, ribbon or pure white, etc. Weapons range from guns to cannons. Fire, … A team of three will be your team, and you will choose to fight against aliens and cyborgs trying to invade Earth. In the battle, you’ll have to take advantage of the terrain, set traps, and be flexible in dodging lasers for them to kill them easily. Game titles have many unique features. First of all, the mode of play. You can choose between a single player or team mode. No more than eight team members. The more players there are, the more chances are won. Because it will be very difficult if you alone prevent the aggression of enemy troops too much right now. The PvE and PvP modes give you more experience. In PvE, you can invite your friends to join and together overcome the challenges, increase the strength of the team in battle. In PvP mode, you can have a great deal of experience in choosing a strategy, fighting skills and challenging yourself to be able to win another real player and become a tech player. Best or not. In the game, there is a system of fighting clothes and weapons extremely wonderful, very diverse and rich. That way, you can freely choose what you like and change it arbitrarily. In the fight, so there are also many different types of tactics were born. Weapons include over 30 different types of weapons, including mines and missiles.
Your fighting style can be unmanned aerial vehicles, soldiers or cybers, cyborgs, and so on. And your enemies are aliens with modern equipment that are not inferior to the earth. , with ultra modern robots. Game design is extremely eye-catching, unique and attractive. Aeroplanes and cybers, aliens and aliens are exceptionally beautifully rendered and animated 3D images make them more authentic than ever before, promising to bring you a great experience. Thanks. The sound is also the publisher’s concern and attention to create the best possible quality. CyberSphere Online MOD is an exciting new and exciting war game for players around the world, helping you connect to fight evil alien forces. Join hands to protect the earth. What’s more amazing is that you can comfortably demonstrate your skills and tactical thinking in such a great game. Download and enjoy CyberSphere: Online Action Game today!

Tue Mar 23 , 2021
Game Uciana Publisher Birdshel Genre Strategy Size 35M Latest Version 26 b3 Get it On Update February 9, 2021 (1 month ago) Have you ever thought that there are hundreds of living planets in the distant universe which are waiting for us to discover? If you don’t believe, let’s join […]