War in video games is a never-ending topic. Of course, any gamer who loves action games will be ready to accept all the games the manufacturer makes if their products make an impression on gamers. If only counted in the action game genre, players will find a multitude of games with different content and fighting styles. And as usual, in this article, I will bring to you a unique fighting game – Drone: Shadow Strike 3 developed by Tilting Point. The game brings players to a battlefield, where you act as a tech soldier. The game promises to bring you new feelings about thrilling and exciting battles. Drone: Shadow Strike 3 is a game with a unique and unique fighting style

Unlike the usual shooting RPGs, “Drone: Shadow Strike 3” for players incarnation into a commanding soldier sitting behind a computer screen. Yes, your job is to control the unmanned aerial vehicle to complete the tasks set out. For those of you who don’t know, drones are one of the most advanced military weapons at the moment. There are many different types of specialized aircraft, each with various features and applications. Usually, they are used in scouting. However, due to technological improvements, the drone was able to attack and carry the same firepower as a specialized fighter plane. And this game is a simulation of driving a real drone. Your role is like the eyes of the army, helping the government to conduct surveys on the terrain, troops, and weapons of the enemy. Not only that, but some missions also give you the full power to destroy the entire enemy base. New and unique fighting style, giving players the excitement when driving a drone

In the game, the player will have a lot of options for unmanned vehicles. You must unlock most of them before you can use them. To do this, the game will give players many different missions so you can accumulate experience, money to open new planes. Each campaign has a specific purpose, players are required to choose specialized aircraft to match the goal and the nature of the job. The flight control simulation system is also relatively simple and easy to get used to. Basically, you will not need to control your aircraft completely. That is, the aircraft moving is entirely automatic, instead, the player will have to control other functions such as Camera, choosing the type of combat missile, and firing. First, the player will have to identify the location of the enemy and teammates clearly. Then issue an instruction to attack the targets that appear on the screen. Overall, the simulation in the flight of this game is relatively easy. For professional gamers, this game is quite an attractive battlefield. Because players are involved in fighting in a completely different perspective – the perspective of a strategy game.

For any role-playing game, the quest system is always the thing that most gamers pay attention to. And of course, you will not need to worry that this game’s mission is less attractive and boring. Because the game gives players more than 49 exciting missions spread out for eight different campaigns. Each mission is a different challenge, including defending the team, attacking the enemy base, trying to survive and obtaining confidential information about the army, or escorting a few special characters. Players will surely be surprised because real battles inspire almost all missions in the game. The only difference is that you control the whole situation of the fight. The system of powerful and influential armed equipment

The planes you have will be unlocked gradually over time. A total of 20 official Ranks are calculated from Airman Basic to Master General. And modern fighters will also be equipped with four different weapons. Each weapon will have 21 ways to transform your aircraft to become stronger. Besides, the game still gives players a system to upgrade the armor to increase the durability of the plane. It can be said that this feature is relatively important because it helps you be able to fight better in any situation. 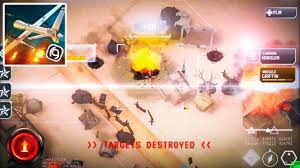 In Drone: Shadow Strike 3, graphics are not the weakness of this game. Because the game always gives you an extremely honest and clear view. The details of the scene are perfected to perfection. Besides, the physical effects in this game are also improved better than previous versions. You can see it clearly through the gun battle between your aircraft and the anti-aircraft fire system of the enemy. I am sure, and it is hard for you to find a military simulation game more attractive than “Drone: Shadow Strike 3” on the phone.

Game Into The Badlands: Champions

Tue Mar 16 , 2021
Game Into The Badlands: Champions Publisher Reliance Big Entertainment (UK) Private Limited Genre RPG Size 251MB Latest Version 1.5.123 MOD Info Money/Diamonds Get it On Update March 12, 2021 (1 day ago) In the Badlands, no one who is good at all has their glorious past involved in bloody battles. […]