Jetpack Joyride 2: Bullet Rush is a fun game where players will fight enemies to complete missions at each level and collect coins. Players will take on the role of Jetpack Joyride, a very famous endless runner! Besides, the character also has a new shooting ability! Let’s find out what interesting things await Jetpack Joyride in your adventure!

This is a sequel to the famous game Jetpack Joyride earlier, produced by Halfbrick; he is the author of other famous entertainment games such as Fruit Ninja, Dan the Man, … Players will participate. Race, fight enemies, dodge many dangers, collect coins, and complete goals in levels. Players can fly through the labs, rush through new labs with the help of infinite ammo! The game with beautiful graphics, simple and attractive gameplay helps players feel attracted every time participating in playing Jetpack Joyride 2: Bullet Rush. 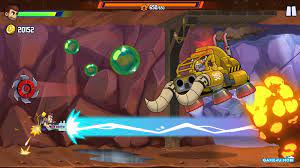 The game builds many different levels and game modes, giving players a lot of new experiences. When completing the mission, players can unlock different racer and increase the powerful weapons and equipment to help fight the enemies more effectively. The more coins players collect, the more opportunities to upgrade equipment and weapons. The enemy in this game is extremely dangerous with a large army headed by Professor Brains, who slightly has to stop him with many different laboratories. During the game, players will be alerted to dangerous threats by signal lights. Each time you collide with sparks or enemies, the player will lose blood. If all the health is lost, the player will lose the match and end the game. Besides, the game also has many different skills and attacks, so you will easily be fascinated by this game. THE VARIETY OF QUESTS

When starting the game, there will be a conversation between Barry and Craig; players will perform quests based on this conversation. When the player fails to complete the quest, Craig will notify the player to try harder in the next quest. A secret gift box will also appear containing weapons and items that help players easily defeat enemies and complete the level faster. The higher the level, the more missions, the more difficult the enemy to destroy, so the player must actively collect coins to buy weapons to destroy enemies. At the end of each level, a boss Briains with many outstanding skills will avoid the attacks and attack the player with very dangerous missiles. HOW POWERFUL FOR ENEMIES ARE

Jetpack Joyride 2: Bullet Rush is also attractive by the variety and richness of the game’s diverse features. Attractive gameplay will be the key to help you love this game. Build a new firing mechanism with completely new space exploration, new weapons. With a new firing mechanism, players will plunge through many dangers and dodge incoming missiles to conserve quantity. His blood, helping the player to destroy the enemy and bosses behind each level. Besides, images are enhanced, beautiful HD graphic design, reproduced with many animations. The game’s interface menus are improved with high intuitive, easy to navigate, and new, modern style. The content, the story is compelling, highly engaging. The context is diverse. Building a powerful enemy that is Professor Brains, along with a group of villains who use many weapons and are very dangerous, gives players the feeling of conquering, destroying enemies high.

Players equipped with powerful items and weapons can freely choose their favorite gun like flamethrowers, lasers, or even an umbrella! Each level will have its own items and powers; players will control the character to overcome the challenges that collect it. These items will help players increase bullets to progress to the next level! Players will exercise new abilities like jumping on crazy new prototypes developed by Legal Research! To feel the rapidity of speed when participating in play. Besides, players can uniquely upgrade Jetpack with many new abilities, which experts have never done before! Are you a person who wants to experience interesting games? Do you also want to immerse yourself in Jetpack to carry out your missions? Curious to know what potentially harmful abilities Professor Brains has? What are you waiting for without experiencing the Jetpack Joyride 2: Bullet Rush game right away to have moments of entertainment!