The end of the world has come, everything is in chaos by the quest. Chase of bloodthirsty zombies herd of living creatures. Gather the courage it takes to cope with the intense battles to protect the shelter, save the survivors and most importantly, protect your life. Try to survive through the dark days with everything that is in your arsenal: rifles, grenades, shotguns, etc. Humans cannot live without each other, so choose for yourself a community and fighting hard to protect your comrades is the most significant thing left over. And that is exactly what the game we are about to mention in this article brings – Left to Survive. This is a survival shooter game available on mobile developed by “My.com”. The game is a perfect combination of survival factors, shooting action that applies strategic elements to coordinate and interact well with other players, protecting the remaining civilization of humanity is what which most survival action games aim for. Left to Survive builds the context of the story happening quite similar to the motifs we often see through the zombie fiction movie Zombie. I mean, the context of the pandemic is that one day, people suddenly see people turning to bite each other, and a lot of people have become victims in this tragedy. Since then, people have been in a state of regaining life day by day. Regardless of the day or night, the signs of the great calamity showed no sign of relief. People are forced to fight and immerse themselves in a new rhythm of life. Coming to “Left to Survive”, you will transform into Conor Flynn, a person trying to survive in a dangerous world along with building the best base for survivors. At first glance, we can clearly see how it plays and the scene has many similarities with the hit series “Left 4 Dead”. While saying Left to Survive is based on the Left 4 Dead game on the computer, the game still retains a lot of differences in the gameplay. The zombies have a relatively moderate movement speed, ie you do not have to move, you can kill all the zombies in the game screen because, in fact, the control system in the game does not support the movement freely. This means that the experience of playing the game will be less stressful and more complicated than playing L4D on the computer. Let’s imagine, if the game is designed for high-speed action, are you sure you are calm enough to hold your phone steady? I can confirm that, for this game, the removal of moving function is not something missing, on the contrary, maybe you have a better experience in gun battles. Back to the character control, I agree with the layout of the game’s control functions because it gives me a completely new and easy to use experience. Compared to the games with complex hand movements such as PUBG, the left-hand takes on the function of healing, using grenades, moving the crosshair; and the right-hand takes the trigger of the trigger, changes bullets, uses a melee knife it brings a completely reasonable experience without lack of. At this point, there may still be many people who disagree with me about this view, but personally, I like the way the Left to Survive works. 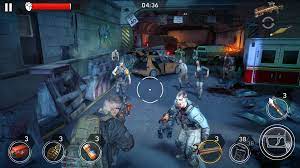 In addition, the game spreads many good features such as destroying and clearing areas with lots of zombies by using weapons with high firepower, which increases the survival rate of stranded survivor; A whole new way of destroying enemy bases – using helicopters and attacking from above with rain of bullets, then taking their resources as spoils; With multiplayer mode, now the difficulty of the game is increased many times because you will not only confront Zombie but also against other players to compete for resources. The game will not be worth mentioning without the Boss, not only including normal zombies but also those that can jump, wear police armor or release explosive toxins; Make every effort to build a strong base to protect yourself from the Zombie and the rival faction, and collect as many survivors as possible, together looting materials to overcome a post-world. The graphics in the game “Left to Survive” are truly amazing. In exchange for a large capacity, you have to agree with me that the game builds an extremely detailed and meticulous setting. The space through each stage is not large, but details such as smoke or the contrast of colors shown by the objects must be said to be excellent. There is rarely a phone game that brings realism and detail as high as this game, not to mention the motion effects in the game are very smooth, there is no phenomenon of being frozen in the way of moving, if having to evaluate on a 10-point scale, I personally would give the game 9 points. Besides, the sound array in the game is also extremely well completed, details such as gunfire, zombie, background music from My.com B.V lively. It can be said that when you close your eyes, you will probably feel the whole space and context of each game screen. Considering the common ground, I really appreciate the experience that the game brings. The game has now reached over 10 million downloads on the Google Play store and received quite a lot of positive reviews from the mobile gaming community. Through the article, maybe I did not mention all the appeal that the game brings. After all, you can only feel the best “Left to Survive” game by experience. Please download the game and then share with me how you feel!