This kind of side-scrolling game is really familiar to players all over the world. It is a game genre that focuses on fighting and offers great adventures. If you still remember “Prince of Persia”, it will be easy to accept Mortal Crusade: Sword of Knight. The challenges and graphics in the game give the same feeling as what you have been enjoying before. However, as a new game, Mortal Crusade will have unique mechanisms to please players. The adventures of the young knight

Mortal Crusade: Sword of Knight, tells the adventure of a young main character. Up until now, he has always been considered a genius in swordsmanship. When this game starts, the character will be transported into a world filled with monsters, zombies, skeletons, warriors, and many villains. Certainly, these challenges will gradually be spread evenly throughout your adventure. Their power is distributed to bring worthy challenges to the player. You have to prepare well to face numerous boss fights, fight off their enormous Magic powers, and survive until you return. Mortal Crusade: Sword of Knight based on the setting of a dark fantasy world. You already know that you will have to confront many different dangerous monsters. They carry the power exploited by the dark forces that exist in this world. All landscapes have been changed by that incredible power. You will have to go through places like dungeons, caves, mines, mountain forests, and wastelands. They are all built with horror looks and gloomy colors. In addition, the 2D pixel graphics also contribute to making things look old and nostalgic. Thanks to this, players will have a very good experience with the game. 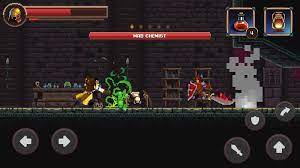 Fight and keep fighting until exhausted

Mortal Crusade: Sword of Knight allows players to constantly fight to satisfy the desire to destroy the enemy. The player controls his character to move from left to right in sequence like a side-scrolling game. Its special feature is that the player will constantly encounter challenges. The density of monsters appearing in the game is dense and their strength increases with time. Midway, there will be secret spots that are not shown outside. If you have no curiosity and exploration then definitely ignore it. Spots like these contain additional challenges that the player must use a different technique to overcome. It’s like it’s not like what’s going on from the outside. However, if you do achieve success in a place like this, you will definitely get rewards that bring convenience to the next journey. If you have played Mario, you will probably be familiar with this design. Besides secret spots, there are also challenging tasks that give you many different rewards. Usually, these quests will bring you a variety of items. Players will have a chance to pick up armors, weapons, and sword to protect the knight in fighting monsters. The Open World mechanism is also applied to this game

Previous platformer games will not usually adopt this mechanism because it has little promotion in character strength. This means that in old games, characters only use limited equipment and will usually win the game thanks to combat techniques. However, coming to “Mortal Crusade: Sword of Knight”, the role-playing factor also greatly influenced its gameplay. Players will have to use the types of power coming from equipment and skills to upgrade their combat abilities. Because of this constraint, you will have to meet opponents that are much stronger than you. At a certain point, she will face an insurmountable opponent at the present time. It is at this time that you have the right to reverse the challenge ahead and destroy the monster to increase your power. This new mechanism is applied to the 2D game, making it much more interesting. 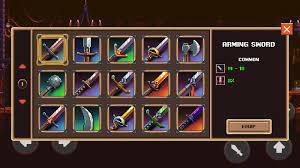 One more convenience of Mortal Crusade: Sword of Knight is that it allows its players to play the game offline. Meaning you don’t have to have any network connection to fight. You can take your device with you anywhere to use it. Your strengthening will be much faster. Up to a point, you can go up against over 12 bosses in the game.

Sat Mar 20 , 2021
Game TALION Publisher GAMEVIL Genre RPG Size 95M Latest Version 3.8.00 Get it On Update March 5, 2021 (1 week ago) Currently, the gaming market has a lot of genres to enjoy. Each category is developed with many attractive game versions. Gamers who want to find games that are gentle […]