Recently, RPG survival games are becoming very popular with gamers, off-beat of them is Mutiny: Pirate Survival RPG. Inspired by trendy names like Last Day On Earth, a game with a theme about post-apocalyptic zombie outbreaks, humans must find a way to survive and re-develop once again. When we come to Mutiny: Pirate Survival RPG, we will enter a vast pirate world. Our mission is to try to survive, develop, and build our ship and fleet, explore the vast world of the game, or maybe ally or even beat other players. Similar to the gameplay of other survival RPGs, when playing Mutiny

Pirate Survival RPG, you must try to survive, collect fruit, find food, rebuild your base and boat. Moreover, the game also adds sailors; you will be playing the role of a great captain, ordering and arranging jobs for everyone to accelerate the game’s progress. However, dealing with these beautiful but deadly islands requires more than that; those islands are primal and have wild animals that always threaten the player at any time. The encounter with enemies in the game is very unpredictable and dangerous, but this danger can also come from other online players. You can choose to be friends with them to survive together or fight to prove who’s victorious. Mutiny: Pirate Survival RPG has created the tension of the necessary survival games. The game is also an open-world game that allows you to travel around the vast ocean and explore the great treasure or even desert islands that no one has ever set foot on. To survive in the vast world of Mutiny

Pirate Survival RPG, courage, and strength are not enough. It would help if you also had a logical survival strategy. As a captain, you need to calculate and arrange to use resources most reasonably. To be able to against attacks from wild animals and enemies, you can find materials and create many different weapons depending on the purpose of use. Also, you set a deadly trap that makes the enemy step back. Not only that, but your food reserves can run out if you unreasonably use them. Or adventure trips that consume a lot of resources but do not bring in anything. That can lead to a bad outcome for you to need a logical strategy to survive in this dangerous pirate world.

As an RPG survival game, the number of recipes and items in this game is impressive, with each item intended for a different purpose. Some of them are valuable items but are difficult to craft and will take up many of your resources. Not only tools but also clothes with different roles, from an ordinary T-shirt to a real pirate captain’s jacket, or even luxury fashion shirts very eye-catching

Pirate Survival RPG is one of the games; with the advanced graphics, the game recreates a vast pirate world, extremely vivid with white sand, shipwrecks, or detailed characters. It creates a real pirate world for you to explore. However, with a beautiful graphics background but the game requires a common configuration, the game’s graphics optimization has brought success to this game; making this game one of the easy to access for most phone users or even those who have a popular smartphone. 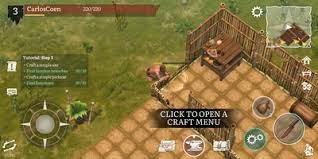 If you are a fan of the RPG survival game genre, Mutiny: Pirate Survival RPG will be a name you should not miss, very positive reviews from other players on many different platforms. All of these bring this game to one of the most successful pirate-inspired RPG survival games. What are you waiting for without setting sail and starting your adventure?

Sat Mar 20 , 2021
Game Tap Tap Fish – AbyssRium Publisher Cheetah Games Genre Arcade Size 160M Latest Version 1.33.0 MOD Info Free Shopping Get it On Update March 5, 2021 (1 week ago) Not only is there a vast space above the surface, but the ocean is also home to much romantic scenery […]