Indie games often have endless and straightforward gameplay, always prioritising infinite entertainment for players, as well as giving them new experiences with each genre. One of them is Ninja Tobu, a platform action game with simple gameplay, and even players can easily enjoy the game in vertical mode or with just one finger. Furthermore, the game uses an ancient Japanese setting, a period when the ninja was widely known as shadow warriors. Thus, the environment in the game will be Japanese style, with images, sound, and surrounding design, combined with the characters to convey Japanese culture to the player.

SIMPLE GAMEPLAY WITH LOTS OF ENTERTAINMENT

Ninja Tobu has gameplay that is considered the simplest among indie games, but in return, it requires players to have good accuracy and alignment. A Ninja always acts in the dark with absolute precision combined with quick judgment to easily win all battles. Thus, the control mechanism is simple and friendly for all ages, suitable for entertainment on the go or killing time. Besides, the game will introduce a series of fascinating challenges, combined with a series of story missions for players to explore the lives of Ninja in normal life. A character system and upgrades will be included throughout the gameplay, offering hundreds of impressive functions or skills for players to deploy the real strength of ninja on the battlefield. Ninja Tobu’s control mechanism is simple; that is, players only need to hold their finger on the screen and drag in the indicated direction. That will make the character dash in a certain direction while clinging to the wall. Each run attempt has no limit on either score or time, making the game endless, and the difficulty will increase over time. The level is also well-designed, where the player will have to rely on walls to levitate and avoid obstacles such as spikes or blades that are spread on walls. That emphasises the precision the player needs to overcome the challenge, and even they can attack all enemies while on the move. Almost all enemies are easily defeated, but in the future, players will have a chance to face epic bosses with dominating power. 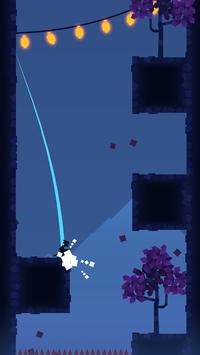 Ninja is a concept for dark warriors, so between them, there will be a variety of fighting styles and physical condition. Therefore, the game will introduce many unlockable characters, along with different attractive effects or powers, making the gameplay richer. Each Ninja has its fighting style, but at the same time, many new weaknesses appear, requiring the player to adapt to each character and develop it effectively. Of course, each character will have its story system for players to enjoy during the experience of this game.

UPGRADE YOUR ABILITIES AND NINJA SKILLS Besides the variety of characters, players will be introduced to a powerful upgrade system, allowing players to develop individual ninja skills and fight stronger enemies. Along with that, players can increase jump distance, grip force, and time to determine the direction. In the future, players will have to fight bosses with overwhelming strength; even a battle can be decided if carelessness happens. Each boss has different statistic, and players can train with them in boss rush mode, an exclusive mode of Ninja Tobu. Moreover, the skill system will allow players to unlock new costumes or effects, for a more enjoyable experience with the game or with each ninja. 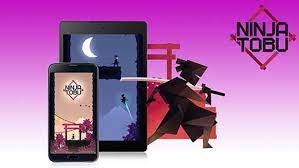 Daily challenges will bring players new experiences, along with generous rewards, to create motivation for players to enjoy the game. Moreover, the daily challenges will have a different design level, although limited but unlock many new features, making its gameplay different from the normal mode. Each challenge like that has a different limit, rewards, and items to upgrade will be more diverse. Even bosses are designed with completely separate functions, suitable to the skills of each player. Besides, the game will have many quests and Objectives for the normal game mode, with many attractive rewards and challenging the player’s ability to handle in each attempt.

ACHIEVEMENT BOARD AND VARIOUS ENVIRONMENT Ninja Tobu is set in Japan as the theme, and the game unlocks new types of environments based on the player’s progress. The same with sound and effects system, constantly being changed to give players new experiences. Also, the achievement system is a highlight, even a leaderboard for players to strive to become the greatest ninja in the world.

Indie games often have simple gameplay and are suitable for entertainment anytime, anywhere without the Internet. Ninja Tobu is a game of that genre and uses Japanese environmental elements to develop whole new gameplay for players. If you are looking for a game that is highly entertaining and uses the Ninja element as the theme, this game will be a perfect choice.

Tue Mar 23 , 2021
Game New Star Baseball Publisher Five Aces Publishing Ltd. Genre Sports Size 128M Latest Version 1.1.2 MOD Info Unlimited Money Get it On Update February 10, 2021 (1 month ago) Baseball became a discipline that is loved all over the world. Even in some places, it is more popular than […]