The developers of the action-shooting game genre are no stranger to the famous World War I & II, simply because this is not only a memorable event but also a great source of inspiration for them to come up with new ideas in developing shooting games. Today, there are many titles that have succeeded in giving players realistic experiences of a war in history. It allows players to transform into soldiers participating in the battle. Not only that, while experiencing the game, players also admire the beauty of that period in the famous places that have taken place the fiercest and fiercest fighting in history. In order to succeed in creating these experiences, game developers are constantly researching those battles and even trying their best to simulate the events most accurate that history has ever. If you yourself are a history enthusiast and love the genre of shooting, today I will introduce you to a game titled World War II. It is the game World War Heroes: WW2 Shooter by the famous Azur Interactive Games Limited on Google Play today. Through this game, you will get experience in WW2 on mobile platforms.

With the first-person shooter style, the movement will be on the left side, actions such as shooting, aiming, bending, will be on the right side of the screen. You can customize the way you want to fit yourself. If you are the type of inexperienced player in the shooting game, do not worry, the game will have an automatic aiming support system to help you be able to aim better. 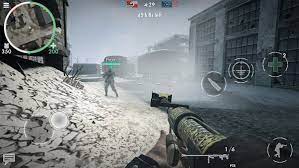 To make sure you know how to move and have basic shooting skills, you’ll start with the game’s Tutorial. Since this is just a guide for you to move and control, you will not have to focus on advanced skill instructions, you will have to improve your shooting skills through fierce battles. Because the game does not have a campaign mode, you will participate in a match between players and compete to win, the goal of the match is very simple. Each match has a time limit, your priority goal is to meet the requirements of the game quickly, this team quickly annihilates the opponent team, it will be easier to reach the goal of the match.

Before participating in any match, players can freely equip weapons available for their characters. To have new weapons, they need to be persistent in fighting, winning and get a reward. In a match, players can also use other support features, easily win against their enemies such as throwing grenades, using first aid kits, anti-tank mines, explosives, etc. However, the number of times used and the number of grenades, first aid kits, mines, etc., can be carried within a certain limit, in order to keep the game balanced. If players are not suitable for equipped weapons, they can use many other weapons, the variety of weapons such as SMG, Rifle, Sniper, Pistol, … in the store will help people play easily find weapons that you feel fit, easy to use. Throughout history, the game has simulated the location map where the 7 most dramatic battles took place in WW2, the appearance of many types of maps also comes with a lot of game modes to help Players are not too bored to constantly fight on a map or a certain mode. The game modes available in the game have different objectives and ways of playing, including 5 game modes and an adjustment mode 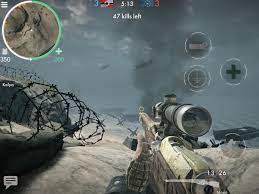 Super Difficulty helps the game stick to the actual level by increasing the damage of weapons. Chaos free mode, also known as Free-For-All, everyone is competing with each other, the player who scores the highest points will win. In the bombing, one team aims to use bombs to destroy the target, the other team will stop the process. Life and death, only one team wins if the opponent is completely annihilated. Team Panzer, the two sides will fight with each other with the legendary Panzer tanks. And the final mode is customizable, in this mode, you will be free to set your own rules and regulations, suitable for playing with friends. In addition to the game modes, other attractive features also appear in the game as motor vehicles, with more than 4 types of vehicles from different countries. Besides, the weapon system of the game is very diverse and plentiful, with a total of 57 weapons that have appeared in WW2 history. The game also promises to bring players events to help people always get free gifts and skins for weapons and more advanced features that are about to be updated in the next versions.

If you are a world history enthusiast and interested in shooter games then World War Heroes: WW2 Shooter will be the perfect choice for you.

Tue Mar 23 , 2021
Game Snoopy’s Town Tale Publisher PIXOWL INC. Genre Simulation Size 60M Latest Version 3.7.8 MOD Info Unlimited Money Get it On Update February 17, 2021 (4 weeks ago) There is no person who does not like Snoopy’s animations, so it is simplified through the didactic and fun world of Peanuts, […]