PAC-MAN is one of the games that have entered the entertainment industry’s legend, with many games and movies coming out about PAC-MAN. The game was first released to players in 1980 and quickly became a global craze in the arcade era. The game has a simple but entertaining game for players to experience. It’s been 40 years since the game was first released, and Bandai will have to do something to celebrate it. And what they do is release the game PAC-MAN GEO – a more varied and improved version of the PAC-MAN game. This game is made with lots of exciting upgrades for players to experience. The combination with AR

AR stands for Augmented Reality, a direct or indirect view of the physical environment where the elements are “augmented” by computer-generated cognitive information. In recent years, this is the technology that many people welcome because of the new experiences it can bring to players. AR has also been combined with a viral game, Pokemon GO, to bring novelty to players. The creative team has added AR elements to the game to provide experiences that players have never had before. The game will be connected to Google Maps to bring players anywhere in the world so you can experience the game. This feature is a relatively new feature that players rarely experience in other games. 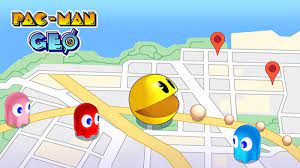 Because the game is integrated with AR features, the game’s map has been upgraded to a much newer level. In the original 1980 version, there was only one maze for players to explore and play the game. Although in later versions there are also upgrades, it is not enough for players to experience. So in this latest version, the player’s toy map is the road around the world. By being linked with Google, players can choose from anywhere in the world the map, and the game will take them there. The player’s moves will be taken from reality in the area that the player has selected for you to experience. For example, if a player chooses Tokyo, Tokyo areas are randomly selected to form the player’s toy map. But it will have a limit, and the player can only freely move in certain areas. This feature will allow players to diversify their experience when coming to more places to play the game.

Although the game map has many changes, the gameplay of the game remains the same, without any changes. The player’s goal is to eat all the dots on the map to win. In the process, the player will still face four ghosts named Blinky, Pinky, Inky, and Clyde, who are looking for a way to hunt you down. There will be PAC-DOTs with special powers that allow the player to attack the ghosts on the map. The player needs to eat it, and you will have the power to chase the ghosts, but the power only lasts for a short time. Once a ghost is eaten, their eyes return to the starting point and continue to attack the player.

Sat Mar 20 , 2021
Game Idle Fitness Gym Tycoon Publisher Codigames Genre Simulation Size 81M Latest Version 1.6.0 MOD Info Unlimited Money Get it On Update February 25, 2021 (2 weeks ago) Have you ever wanted to open a business for something? Do you want to be a moderator of something serious enough to […]