Recently, the disappearance of wang yajing, an 18-year-old girl who occurred in shangqiu, henan province, after being exposed by the media after dinner in the early morning, attracted much social attention. at that time, xiaobian had a sense of foreboding, a big living person, and a girl, where can he go. after so many days of being lost, the possibility of being killed is very high!

on may 17, seven days after the case, the latest news about the case came from the police in shangqiu, henan, but unfortunately it was unfortunate news that the girl had been found and killed. the case is simple to review, at about 1 o’clock in the morning on may 9, 18-year-old girl wang yajing and 5 friends met together to eat near the future international on shenhuo avenue in shangqiu city, when the meal was not completely over, wang yajing and her friends left alone after dinner, and since then there has been no news, wang yajing has left the restaurant early and has been missing for 7 days.

in the past two days, after the news about the disappearance of wang yajing, an 18-year-old girl in shangqiu, henan province, circulated online, it caused many netizens to worry and anxiety.

although they have never known each other, netizens who have been paying attention to this girl will probably feel extremely sad when they hear this news, and it is even more difficult to imagine what kind of mood the girl’s family is in. she was only eighteen, she had just come of age, her family was in poor condition, her parents were a little disabled.

on may 15, the police arrested the criminal suspect chen mou. some witnesses revealed that at about 5 p.m. on the 16th, he saw the police come out of the market with a criminal suspect of about 20 years old, the suspect was wearing shackles and handcuffs, wearing white clothes and black pants, and heard that it was an errand rider who said that he had come to identify the scene.

some netizens exposed the relevant information of the suspect. the suspect is a male, 23 years old, han ethnicity, a native of shangqiu, henan, suspected of being a takeaway brother. on the day of the incident, the suspect drove an electric car with the trademark of a certain errand platform on the electric car, which later became a means of transporting corpses. 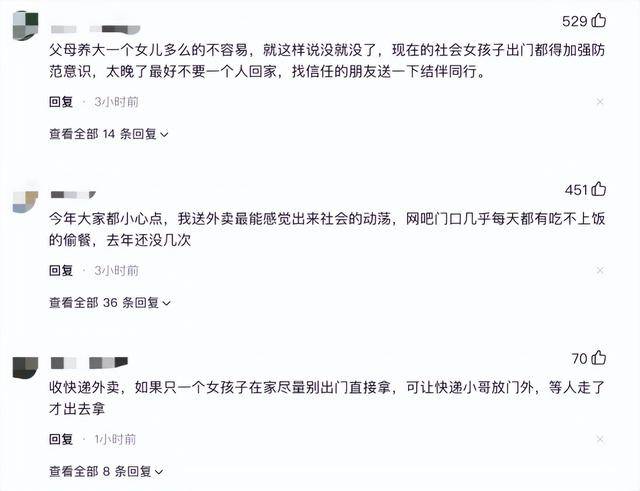 on may 17, the police issued a notice saying that the criminal suspect chen moumou was found by wang moumou when he followed into wang moumou’s residence in the early morning of may 9 to commit theft, so he killed him and transferred the body.

according to the police report and some information from netizens, we will reason about the details of the girl’s murder, and we are really angry at the suspect’s behavior.

the first is theft or theft. according to the police report, the suspect was found by the girl when he stole, which is not quite logical. thieves generally do not follow the parties into the house, but after stepping on the dots to find out the habits of the parties, they sneak into the door of the house to carry out illegal activities when they are not there, rather than following behind to steal property. moreover, an 18-year-old girl has just joined the work force, what property can be stolen, the only thing that can be stolen is her body. the clear-eyed people saw that the suspect might want to steal the color, and now that the little girl is gone, there is no proof of death, which is an excuse for the suspect. some netizens speculated that it may be a matter of seeing the light, and the 23-year-old criminal suspect raped and killed the victim.

in addition to rape and killing, there are also heinous things. the chat records exposed by locals have spread among netizens, and the content recorded above is more detailed and more terrifying. because, when the girl’s body was found, it was no longer possible to fight.

when the police arrested the suspect, he was still asleep, and the girl’s head and some tissues were placed on the bedside table of the room.

some of the organizations have been flushed into sewer pipes by suspects and scattered everywhere. the suspect is really inhumane, and the animals are inferior.

these plots, which can only be seen in the movie, are really staged around us, killing and dismembering, staying with her body for 6 days and 6 nights, extremely cruel.

the police are not problematic to report in this way, and only a euphemism is given. if not dismembered, takeaway is not easy to transfer electric vehicles.

an 18-year-old girl, at the best age in her life, is really painful and regrettable, the criminal suspect is only 23 years old, the means of committing the crime is so cruel, it is really a thousand knives can not be excessive, waiting for him is the severe punishment of the law. more is that girls must learn to protect themselves, and the heart of prevention must be there

China - The 18 year old girl was killed after a dinner party in the early morning, and the police reported that she had been killed, and the 23-year-old food delivery suspect was arrested

Thu May 19 , 2022
this is a sad news, henan shangqiu 18-year-old girl was killed after a dinner, heartache! spend the same age! at present, the suspect has been caught and hopes to return the girl to justice as soon as possible. 18-year-old girls, in their youth, but suffered from poisonous hands, really can’t […]