Tanks, racing, and shooting must be the best genre for many players all over the world. So have you ever imagined what would happen if all three of those video game types were combined into one? Steel Rage is a perfect example that could not be any more perfect. This is an action shooting game that was developed by GDCompany. The game has an extremely unique motif that you will be able to drive vehicles that equipped with extremely good modern weapons to fight against other players with your teammates. This game has many good features, including its gameplay, soundtracks, and graphics. The way that Steel Rage works is very simple, it is very similar to other shooting games but instead of playing as a soldier, you will play as a driver, it also similar to other tank battling games but instead of driving tanks, your vehicles will be cars or trucks. As mentioned above, you will be the one who drives your favourite vehicle to fight with your comrades, with the weapons that your vehicle has been equipped to fight against the enemy team.

The rule of the game is also very simple, the two teams just need to destroy each other’s vehicles until either team has no vehicle left on the battlefield. If after the timer counts down to zero, neither team is completely destroyed, the team with more vehicles on the battlefield will be the winner of the game. When the battle is over, each player will receive a good amount of rewards that worthy of the achievements that you and your team have achieved. The winning team will, of course, will receive more rewards than the losing team. With these rewards, you can use them to upgrade your vehicle or even buy a completely brand new one. 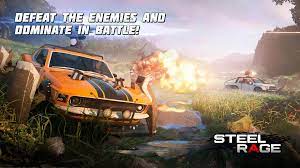 The game supports an extremely diverse vehicle system with many different choices of colors, designs, and functionalities. You can freely choose your favorite vehicle model from many kinds of vehicles such as sedans, mini cars, trucks, military cars,… You can upgrade your favorite vehicle to its ultimate level by equipping it with state-of-the-art weapons, upgrading its chassis to increase durability, and more.

The weapon system of the game includes many different types such as anti-tank guns, automatic machine guns, and even rockets. Each weapon will bring different advantages. Anti-tank guns have a very high rate of penetration through the enemy’s armor, which will deal a decent certain amount of damage to the enemy. Automatic machine guns have great damage over time but are more difficult to hit when the enemy is constantly moving. The last kind of weapon is rocketed, which is capable of inflicting an amount of enormous damage on enemies with a very high rate of accuracy but low on damage per second. You should consider choosing yourself the weapon that suits you and your vehicle the best.

Chassis for any driving style

In terms of graphics, the game itself has an extremely impressive graphics for a game for mobile platforms. The developers have done a great job in designing every single vehicle and weapon. The most remarkable thing when referring to the game’s graphics is the battlefield maps. The battlefield maps in the game are very large, everything is meticulously designed from simple things like the trees, the grasses, the rocks to complex obstacles such as the cranes, the houses,… Along with the extremely smooth visual effects of bullet sparks, smoke effects,… All of those have made the game become more realistic than ever. If your phone is too weak, you can lower the graphical configuration down in the settings menu of the game. This will let literally everyone be able to play the game. 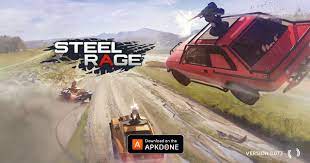 The soundtracks in the game is also a big plus. The game has background music with the style of rock and metal, making players always in a state of excitement for a battle. Along with realistic sound effects during the battle, the gaming experience of the player will definitely be raised to a new level. With top-notch graphics and realistic soundtracks, combined with the unique attractive gameplay, the game will surely have a good spot in the video game market industry. In addition, the game will not only stop at the existing features, in the future, but it will also be updated a lot more, giving players even better experiences.