Model Minh Khac is currently present in Bali island, Indonesia to compete in Man of The Year 2022 (Male King of the Year) with representatives of many other countries.

In the exam preparations, Minh Khac brought a unique national costume, inspired by the image of Saint Giong made by designers Bao Bao and Ngoc Thien Son. Warrior-style attire, made from recycled plastic, young rubber and some light materials inlaid with silver.

Minh Khac said he chose this design to introduce pride in Vietnam’s traditions and majestic history to world friends and express his youthful spirit, strength, ambition, and national pride.

“When I think of the national costume, I want to wear a meaningful design, not just a sophisticated, beautiful outfit. My team and I discussed many different characters. In the end, all unifying Saint Giong is a heroic figure of national stature, suitable for me to express the most,” Minh Khac said.

The outfit has openings that help runner-up The Next Gentleman show off her toned, muscular figure.

The model said the outfit was light but detailed, easily dented, so he had to be very cautious when bringing it to Indonesia to compete, on 13/8.

Minh Khac will have nearly 10 days of competitive competition with representatives of other countries on Bali island.

‘Man of The Year’ is a competition to find influential gentlemen who positively impact society. This year the contest revolves around the theme, activities to show interest in the environment and protect wildlife. Therefore, I chose to wear clothes from recycled materials to send a message calling for people to join hands to protect the environment. Over the past time, I devoted myself wholeheartedly, spending a lot of time training and preparing for the competition. Two months ago, I was helped and trained by Ms. Ha Anh and her friends who are experts in many fields in the categories: physical strength, English, photography … I will try to perform well to achieve high results in this arena,” Minh Khac said.

Nguyen Minh Khac was born in 1992, from Tay Ninh, 1.83 m tall, has a beautiful body, angular face, and masculinity. He won the 1st runner-up of The Next Gentleman – The Perfect Gentleman contest in the first season.

The ‘Man of The Year’ competition takes place from 15 to 23 August in Bali, Indonesia. Minh Khac is considered to be in the group of potential contestants who have a chance to win high rankings. 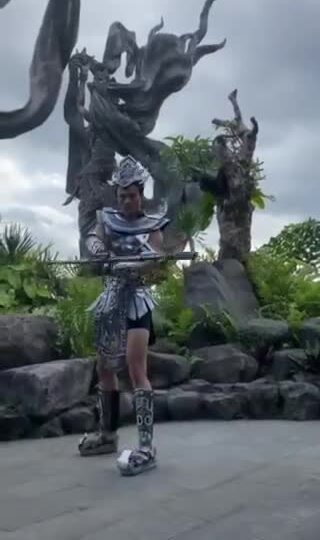 Wed Sep 14 , 2022
Miss Thuy Tien ‘changed the wind’ for her personal style by choosing to wear a design that emphasizes tenderness from the treatment of glutinous fabric to pastel purple tones. Miss Grand 2021 does curling hair, wears pearl earrings when wearing a ‘second round swallow’ dress, creating a three-storey block from […]